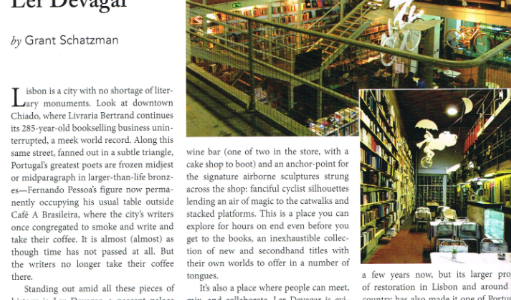 Lisbon is a city with no shortage of literary monuments. Look at downtown Chiado, where Livraria Bertrand continues its 285-year-old bookselling business uninterrupted, a meek world record. Along this same street, fanned out in a subtle triangle, Portugal’s greatest poets are frozen midjest or midparagraph in larger-than-life bronzes—Fernando Pessoa’s figure now permanently occupying his usual table outside Café A Brasileira, where the city’s writers once congregated to smoke and write and take their coffee. It is almost (almost) as though time has not passed at all. But the writers no longer take their coffee there. 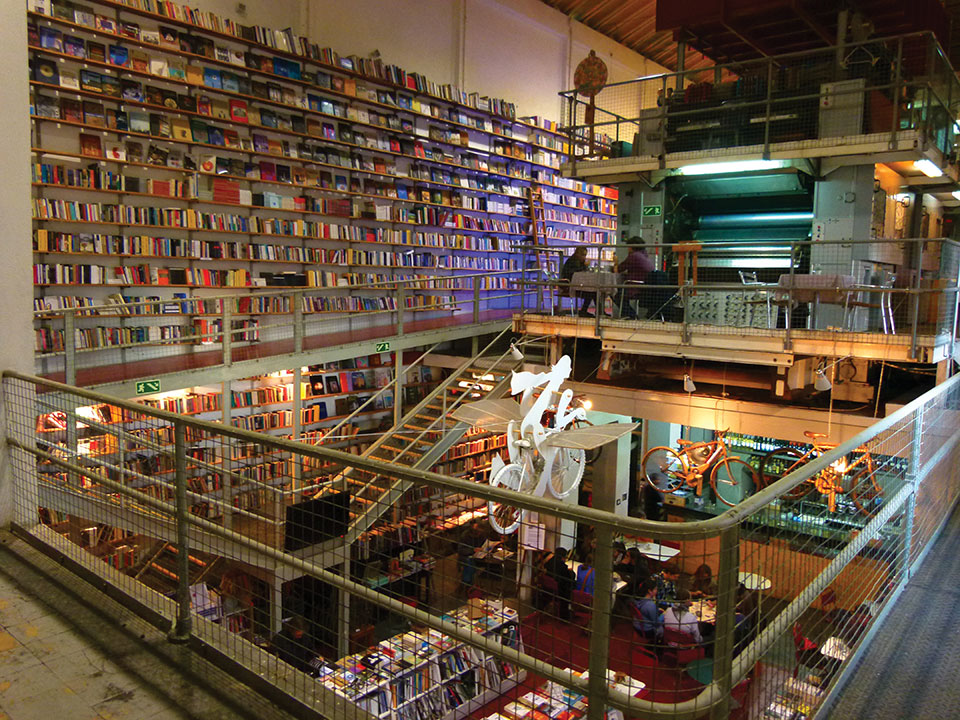 Standing out amid all these pieces of history is Ler Devagar, a nascent palace of book culture more interested in restoration than preservation. After a brief stint in Lisbon proper, the bookstore relocated to the city’s fringe, opting to take up residence in the ex-industrial premises of Alcântara’s rapidly revitalized LX Factory (pronounced “el sheesh”). Now a hub of precocious restaurants, boutiques, art, and design, the area seems a perfect fit for Ler Devagar’s own ethos: not a site of Lisbon’s literary history but a sign of its literary future.

Ler Devagar“Read slowly.” That’s the literal translation of this three-story bibliophile’s dream and the persistent invitation of the shop’s open space. The optics are, in a word, stunning. Books line the aisles on the first floor and climb up every spare inch of wall on all three. To one side a massive outmoded printing press sits like a column, providing a tucked-away space for a coffee and wine bar (one of two in the store, with a cake shop to boot) and an anchor-point for the signature airborne sculptures strung across the shop: fanciful cyclist silhouettes lending an air of magic to the catwalks and stacked platforms. This is a place you can explore for hours on end even before you get to the books, an inexhaustible collection of new and secondhand titles with their own worlds to offer in a number of tongues.

It’s also a place where people can meet, mix, and collaborate. Ler Devagar is evidently designed with conversation in mind: everywhere tables are distributed plentifully, in unfussy clusters fit for lively groups and small, neat rows for quiet couples. Rotating exhibitions and regular readings, performances, and workshops push Ler Devagar from a bookstore to a dedicated community arts space. A small, still-functioning press rests on the uppermost platform amid an exhibition- and work-space for local artists; on one occasion, at least, it has spit out the warm, inked sheets of one of Lisbon’s award-winning independent newspapers. Sectioned off from the rest of the shop is the auditorium, Ouvir Devagar (“listen slowly”), comprising a stage and a couple dozen chairs that, if the online events calendar is any indication, receive ample use these days.

Ler Devagar has been counted among the world’s most beautiful bookstores for a few years now, but its larger project of restoration in Lisbon and around the country has also made it one of Portugal’s most valuable cultural projects. Just one example: in 2013 Ler Devagar proposed a project to restore eight different disused spaces in the historical castle-town of Óbidos, turning them into book-minded shops and spaces like the Literary Man, a library-style hotel decked with over forty thousand titles.

Two years later Óbidos became one of UNESCO’s twenty “Cities of Literature,” officially making history rather than preserving it. Along the way, Ler Devagar has made something else that may be just as important: an ample number of places for writers to take their coffee.

By Grant Schatzman. Writer and editor in Norman, Oklahoma, and a student of English literature and letters at the University of Oklahoma.